Lives and works in: Amsterdam

Folkert De Jong creates macabre sculptures from polyutherene and styrofoam. His human sized figures are dismembered and reattached in bizarre poses. They often come dressed in theatrical clothing and splashed in lurid colours. His work often focuses on the history of his native homeland, Holland, and draws the viewer into an introspective state. 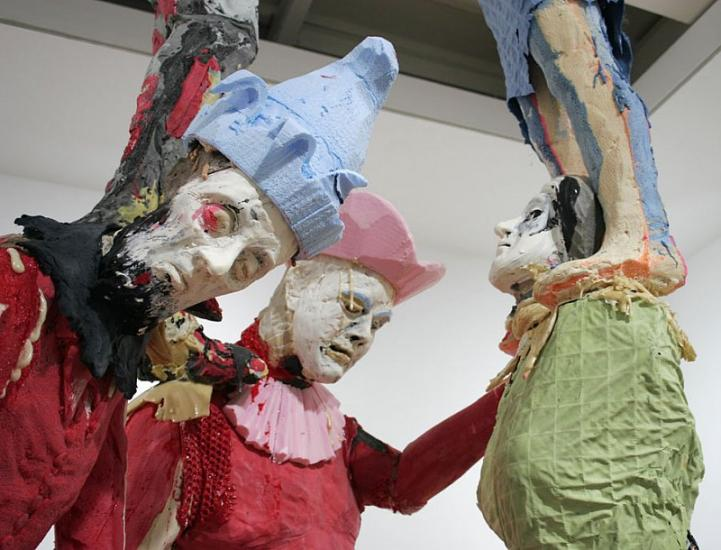 Close up of The Violin Player (2007), Image courtesy of James Cohan Gallery.

De Jong pairs a classical figurative focus with a lexicon of unorthodox materials. As a key substance in his sculptural works, Styrofoam serves as a weightless and artificial construct that imbues De Jong’s figures with an otherworldly presence. However, the lightness of the objects does not diminish the menacing air which surrounds them. Although his creations are bathed in vivid colours, they are dirtied, scratched and weathered. The fragility of these sculptures is a ruse; styrofoam does not rot like wood, and cannot be corroded like stone. Its very essence contains contradictions that are a running theme in De Jong’s work. Not only is it featherlight and likely to outlive us all, but the unassuming material is also the product of a deadly epoch. Styrofoam was manufactured during World War Two by a company that went on to develop the deadly chemical Agent Orange, and was then marketed by the makers of the Zyklon B gas. These incongruities are echoed in De Jong’s work – the sculptures seem clownish and humourous but appear more and more monstrous on closer inspection. The artist dribbles polyurethane down their faces and gouges their limbs, revealing a rough texture beneath that is unnervingly similar to raw flesh. They do not seem to mind this treatment. The expressions of the characters are often ambiguous. Influenced by the gothic genre, they mimic gargoyles perched atop an imposing cathedral, looking down impassively at passersby. 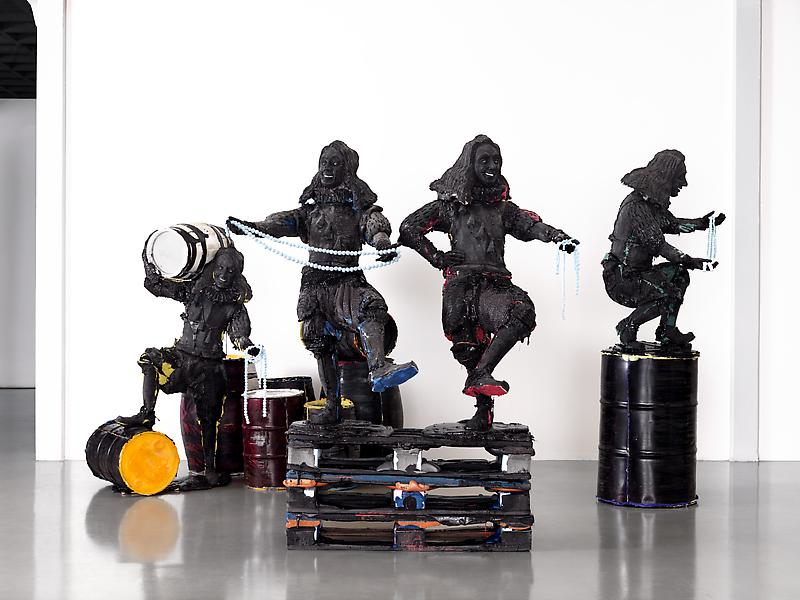 One could almost imagine that these are creatures from a nightmarish dimension not too dissimilar from ours; the context of De Jong’s works are often based on dark chapters of our own history. His protagonists seek to examine his motherland’s destructive colonial past. Take his ‘Traders Deal’ sculpture series, for example. This series was inspired by the sale of Manhattan to the Dutch settlers, allegedly sold for worthless glass beads. Historically, it was a story used to insinuate the the ignorance of Native Americans, and how the clever settlers therefore ‘deserved’ the land. This mockery is evident in the theatrical gestures of De Jong’s colonists. They are filthy and blackened, dancing atop oil barrels and pallets like lowly street hustlers performing for scraps. All the gloating dummies have the same face. De Jong says that they ‘are copies made from one mould, from one single character. The clones are trading with themselves, their own kind, ripping off each other and facing their destiny; self-destruction.’ [Daily Serving] ‘Ripping off each other’ is a fitting description of what actually took place. As history later proved, it was the Dutch who were duped – the land they paid for never belonged to the tribe in the first instance. When the Wappinger Confederacy (another group of Native Americans and the rightful owners of Manhattan) contested the Dutch claim, the settlers ended up paying twice. 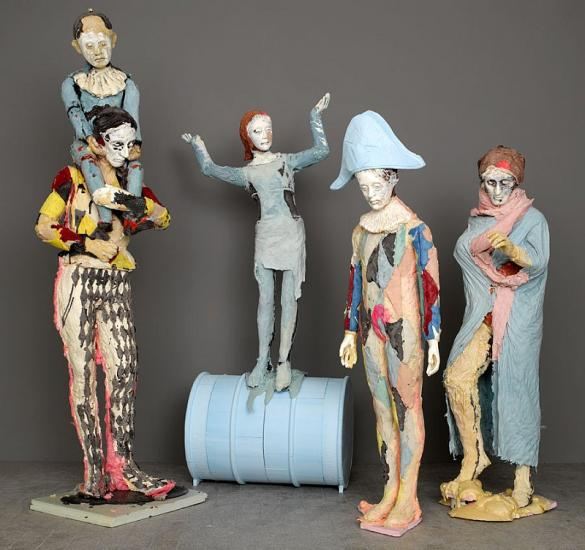 De Jong also uses his mannequins to investigate the depths of the human psyche. Traditional Dutch garb often adorns his characters, harking back to the past, creating a sense of alienating the viewers with garish poses and mottled flesh. This alienation is created by both a distance from the events and the other possible historical perspectives we can now contemplate. Moments of victory and cunning are revealed to be pitiful, shameful actions. The very appearance of his sculptures encourage us to reconsider notions of colonialism while bright childlike colours suggest an immaturity or ignorance in his ancestor’s actions.

However, the grimy stains and disfigured bodies allude to the fact that these events cannot be absolved by time, or by being explained away as actions typical of the era. The violence and exploitation of colonists should not be justified by pretending that the oppressors didn’t know any better, as if they were like children. De Jong’s effigies are psychologically complex, as is the dark history of his homeland. 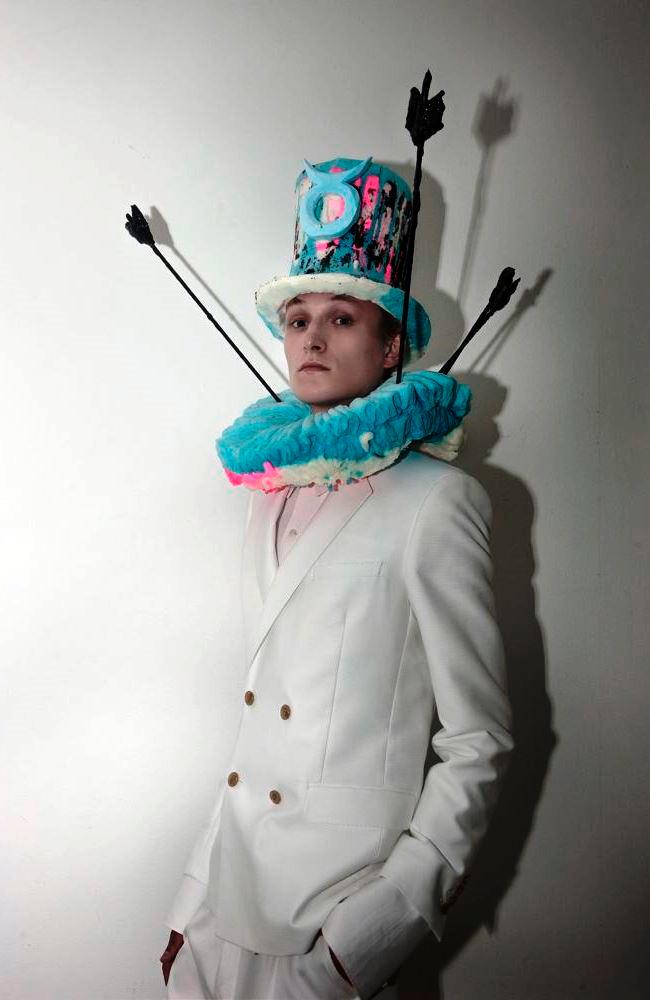 It’s worth noting that De Jong began his career as a performance artist. For this he often made costumes and sets, and has since gone on to design clothing for theatre companies and fashion designers. Pictured above is a product of the collaboration between de Jong and Dutch designer Walter Van Beirendonck, where De Jong created a vibrant series of hats to clash with Van Beirendonck’s pristine suits. The artist believed that the suits served as a modern day armour. His hats and collars further guarded the models behind the traditions and prestige of an old world.

One can see this theatrical influence in his sculptural works. His figures are not separated from the audience by plinths, but instead their feet touch the floor as ours; they walk among us. This integration into the gallery space only adds to the threatening auras of these highly expressive creatures. His characters are sometimes based on real people. For example, De Jong’s latest solo exhibition: ‘Weird Science’  focusses on the artists and designers of the De Stijl movement. 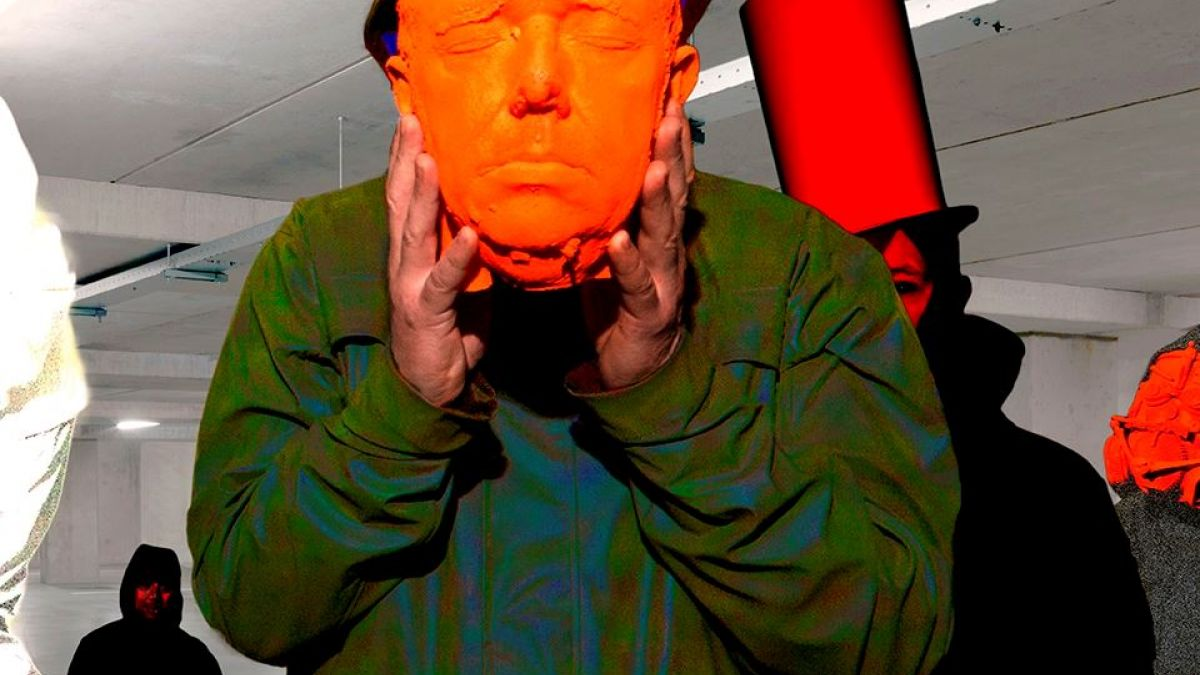 Critic Sue-ann van der Zijpp has referred to the feeling that arises from gazing upon De Jong’s statues as a ‘historical sensation’: the sensation that one is actually facing an authentic presence from the past, an experience similar to the sublime. We couldn’t agree more.

Folkert de Jong studied at the Academy for Visual Arts and the Rijksakademie for Visual Arts in Amsterdam. He was awarded the Prix de Rome for Sculpture in 2003 and has exhibited internationally in galleries and Biennales including The Busan Biennale in 2016,  The First Kiev International Biennale of Contemporary Art, Ukraine, (2013), the Glasgow International Festival of Visual Art, Scotland, (2012), The 17th Biennale of Sydney, Australia, (2010) and the Athens Biennial, Greece, (2007).His works are present in important museums and collections around the world, including MoCA (Los Angeles), the Groninger Museum (Groningen), the Musée des Beaux Arts (Montréal), the Saatchi Collection (London), the HVCCA Hudson Valley Center for Contemporary Art (New York).