Lives and works in: Oxford, UK

The South African born artist Carla Busuttil reformulates the conventions of portraiture to create grotesquely comical imagery. By parodying the faces, gestures and clothing of influential figures, she examines the ways in which authority is bestowed, exploited and communicated. Busuttil investigates the visual manifestations of power by reappropriating professional photographic imagery from a wide range of sources, such as newspaper clippings and internet archives. Informed by the troubling legacy of South African apartheid, Busuttil’s work is instilled with an underlying cynicism. She handles sinister themes with a facetious and punchy humour, confronting and deflating powerful public figures with garish colours and clownish forms. 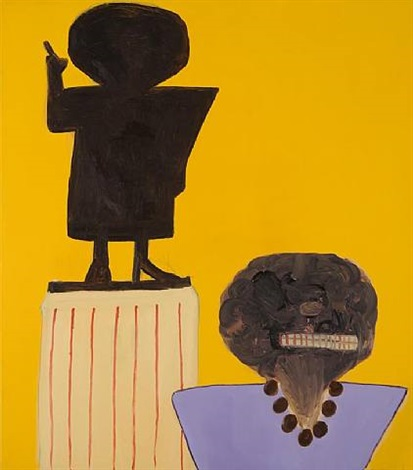 In Great British Smile (2008), for example, Busuttil considers the legacy of the British Conservative Prime Minister Margaret Thatcher (b. 1925-2013). The painting shows a figure in the foreground with a blackened head and toothy grin. She is identifiable as Thatcher through Busuttil’s inclusion of iconic visual signs: Thatcher’s bouffant hair, pearl necklace and ‘iron lady’ stance – the attire that encapsulates the former British Prime Minister. Against a vibrant yellow backdrop, a silhouetted statue of Thatcher stands atop a plinth, alluding to a 2002 incident, when a marble statue of Thatcher was decapitated and left standing in the Guildhall Art Gallery, twelve years after Thatcher’s resignation from office. Fuelled by a passionate disdain for the previous Conservative Prime Minister, the act was a rebellious gesture against the ‘ills’ of the British political system. Busuttil emphasises the defaced Thatcherite statue by including her own commemorative sculpture. Yet the artist’s re-creation remains unharmed, standing defiantly and mimicking Thatcher’s iconic gesture. Busuttil portrays Thatcher as both a detested and celebrated emblem of female dominance. She is at once an opinionated, stoic and vulnerable character, depicted with a ‘great British smile’, forced through gritted teeth. The grinning foreground subject is depicted with smeared, indiscernible features. This is a symbolic defacement which forms part of Busuttil’s ongoing examination of corruption and controversy, and the damaging consequences of polarised public opinion. 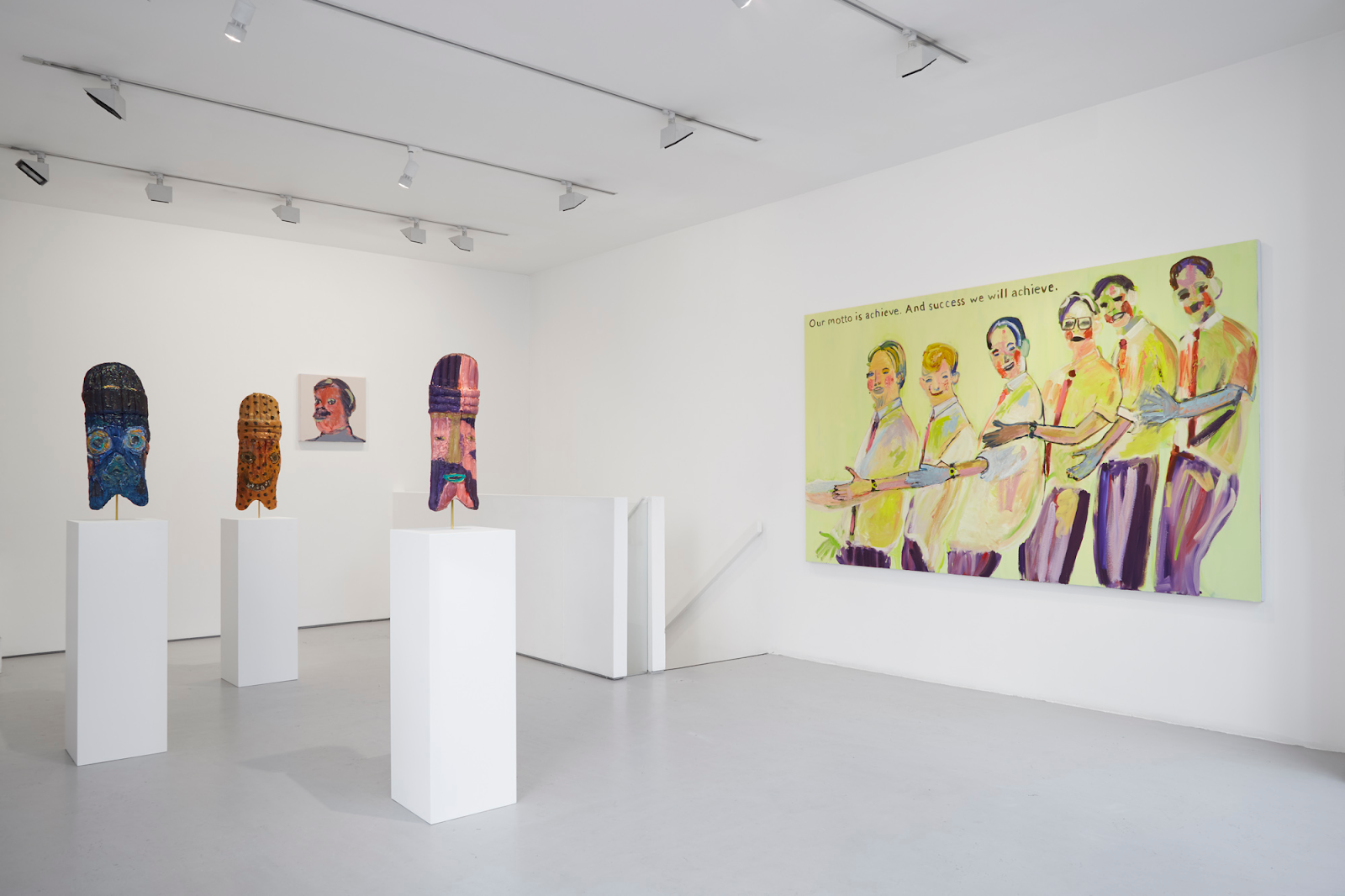 In her third solo show in London, entitled: The Super Suburb Defence Authority, at Josh Lilley gallery, London, in 2016, Busuttil reflected further on the deeply flawed political history of her South African homeland. Growing up under apartheid legislation – operative from 1948 until 1991 – Busuttil witnessed the damaging consequences of institutionalised racism and the demeaning effects of systematic racial segregation. Busuttil’s installation included a series of painted cricket pads, decorated with bold, expressive faces, animal patterns and striking colours. Rendered in garish pinks and blues, they convey a playful childlike frankness. Busuttil’s use of the cricket batting pad, however, conjures darker historical connotations attached to the sport. Cricket was introduced to South Africa as a consequence of British colonisation, with the first match taking place in Cape Town in 1808. Busuttil’s objects thus become vestiges of South Africa’s colonial past. Drawing upon the stylised features of traditional African tribal masks – once believed to possess supernatural faculties – Busuttil produces modern-day counterparts: the painted surfaces scowl, sneer and bare a mouthful of sharp teeth, satirising and unnerving with their anguished and mocking taunts. 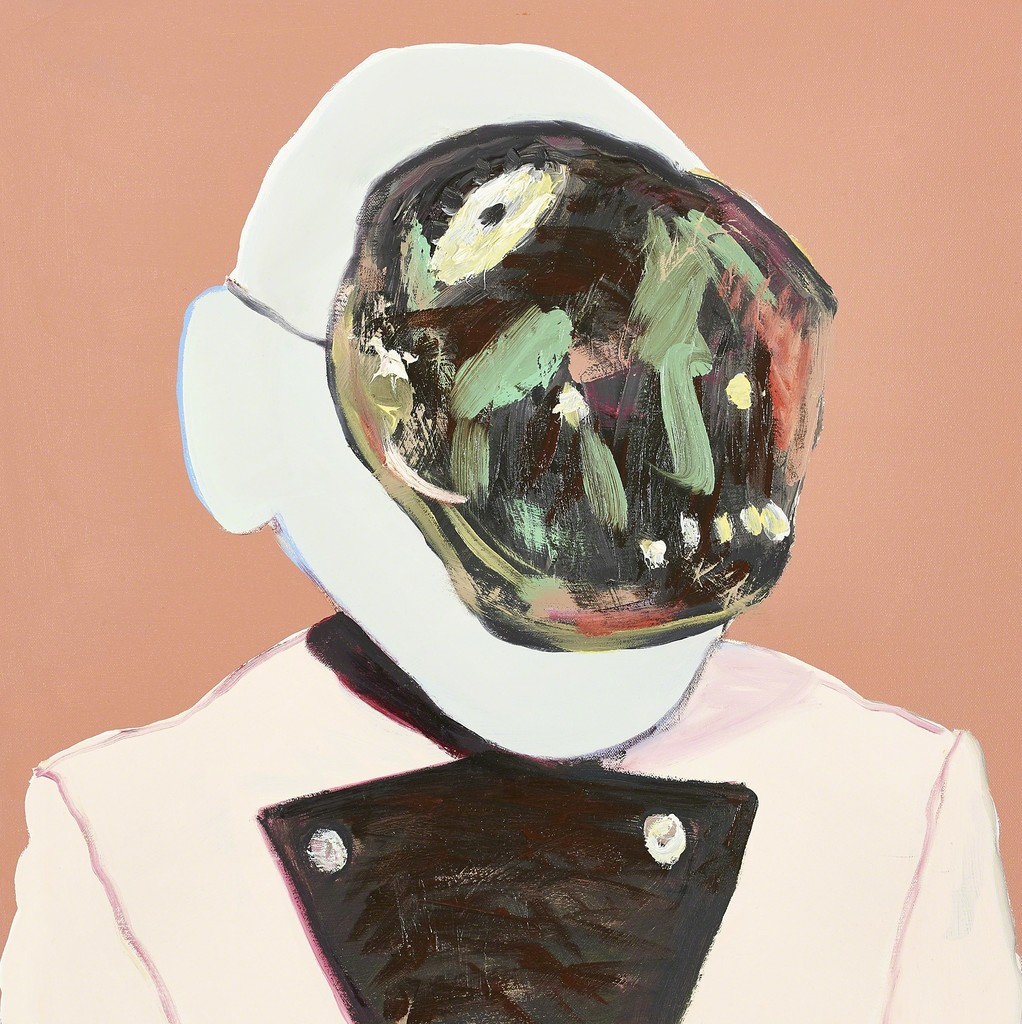 Likewise, in No More History (Horse Mask) (2015), Busuttil uses the mask to allude to the hidden or unwritten parts of South Africa’s past. Busuttil’s figure appears muzzled and obscured; portrayed with little or no colour and devoid of any identifying features. An area of thickly applied paint is the basis for the ‘horse mask’. Busuttil includes an eye amidst erratic brush marks, akin to the all-seeing eye of Providence – emblematic of omniscience, moral conscience and truth. Situated next to Busuttil’s faceless central figure, the eye references the loss of personal identity, while also being a visual metaphor for the turning of a ‘blind-eye’ to the victims of history. The mask becomes, therefore, a symbol for the unseen and unseeing; the disregarding or forgetting of South Africa’s deplorable national history.

Busuttil’s forms are rendered with battered and distorted appearances: nightmarish caricatures which seek to abase the corrupted and corruptible. She employs the magical and monstrous associations of the African mask in order to provide a commentary on the mystifying power of charismatic leaders and their beguiling public personas. With its obscuring function, the mask becomes a metaphor for the deceit and misconduct at the core of the Establishment. Ironically, therefore, masking becomes unmasking – as Busuttil unabashedly unveils the true, yet hidden, faces of a power-hungry elite.

Carla Busuttil (b.  Johannesburg, South Africa, 1982), completed her BA in Fine Art at the University of Witwatersrand, Johannesburg, in 2004. In 2008, Busuttil went on to complete her postgraduate studies at the Royal Academy School, London. Her first solo show, entitled Tuxed Fucks – and other curious outfits, was held at Gimpl Fils, London, in 2009. Busuttil focused on the presentation of power and authority in her portraits of politicians, statesmen and other world leaders. She next exhibited at Josh Lilley, London in 2011 and 2013. Internationally, she has staged solo exhibitions in Seoul, South Korea (2014) Johannesburg, South Africa (2012 and 2016), Los Angeles, America (2015) and Milan, Italy (2015). Her most recent solo show in London, The Super-Suburb Defence Authority, was held at the Josh Lilley gallery in 2016. Busuttil’s work was included in the Royal Academy Summer Arts Show in 2006, and is currently on display at the Royal Academy Summer Exhibition 2017, from June 13th to August 20th.

For more information about Busuttil’s practice and upcoming exhibitions, visit:

Carla Busuttil at the Saatchi Gallery