Lives and works in: London, UK

Salvatore Arancio’s work is characterized by juxtapositions: natural forms and artificial compositions, beauty and imperfections, science and legend. Following the recent conclusion of his solo show in Milan, And These Crystals Are Just Like Globes of Light, Artvisor takes a closer look at the artist and his practice.

Black Dolerite Spires Protecting The Portion Of Volcanic Tuff On The Beach Underneath (2010), courtesy of Federica Schiavo Gallery. This artwork is available on Artvisor, contact us for more information.

Growing up under the dark shadow of Mount Etna, it is no wonder that Arancio looks to geology and the violent power of the earth for his etchings and sculptures. Influenced by 19th century scientific sketches and studies, Arancio’s etchings capture the wonder and adventure of the intrepid frontiersmen seeing a strange new world for the first time. His landscapes portray towering smokestacks, gorged earth and mountains which are twisted and barren; they are wild and untamed. Previous scientific documentation of the 19th century had elements of folklore mixed into sketches. Following in their footsteps, Arancio merges myth and fact in his etchings to create a disturbingly familiar fiction. The outcomes are like a glimpse into the past, or perhaps a warning from the future. With the precarious balance of the environment as it is today, one has to wonder whether these works are simply forged in imagination or whether Arancio knows something we don’t. In this narrativized state the etchings bare an unsettling air, and it would do good to heed the possible environmental warnings one can find in them. 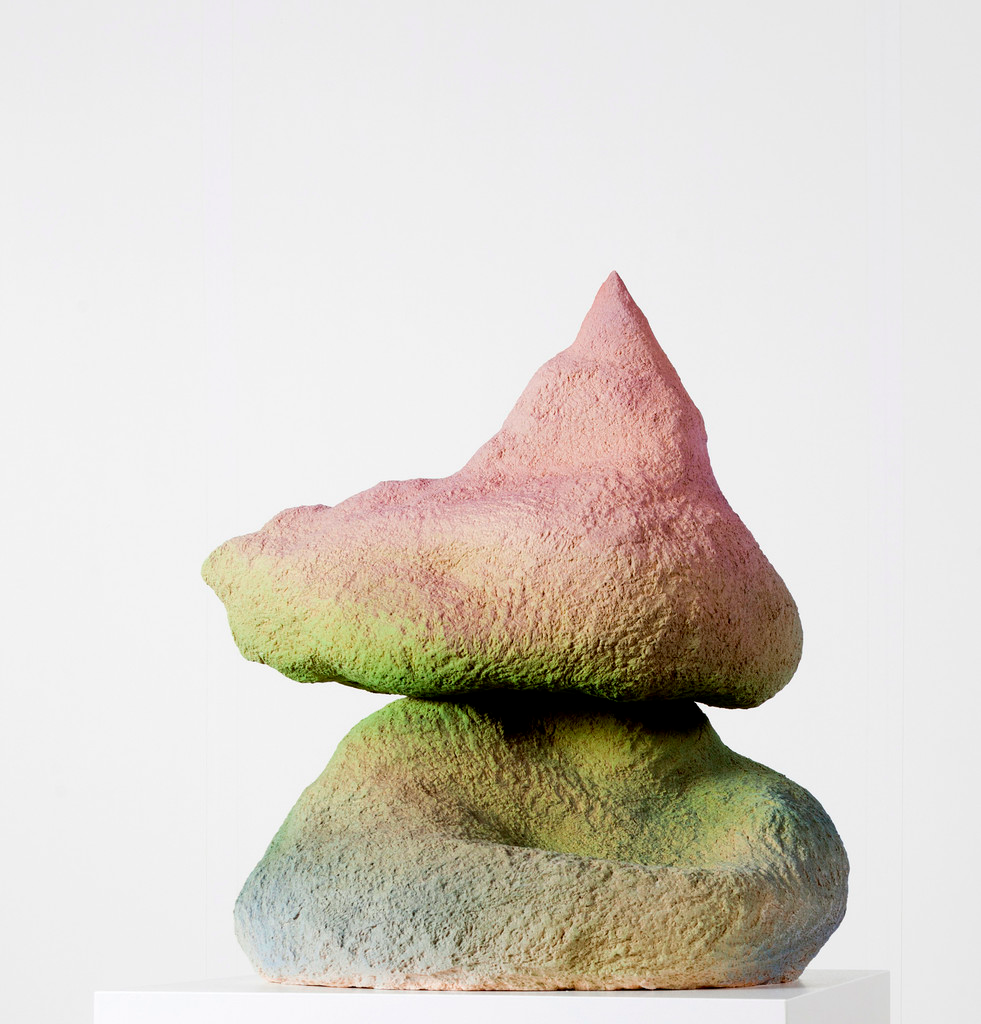 Untitled (Hoodoo), (2013), glazed ceramic, courtesy of Federica Schiavo Gallery. This artwork is available on Artvisor, contact us for more information.

His sculptures follow the natural forms depicted in his altered landscapes. Smooth and rippled stacks of ceramics create lava mounds that sometimes come in the form of brightly coloured neon shades, or sometimes glisten in black. These bulbous formations, although naturally inspired, appear alien and disconcerting. Arancio achieves this by contrasting materials, symbols and forms to create disquieting imagery. A somewhat apocalyptic theme runs through all of the artist’s oeuvre. In his sculptural works, one can be reminded of a bleached, dying coral reef, or even an ash sculpture from doomed Pompei. Some take the appearance of calcified sea organisms, fossilised for centuries and lost in the deep. 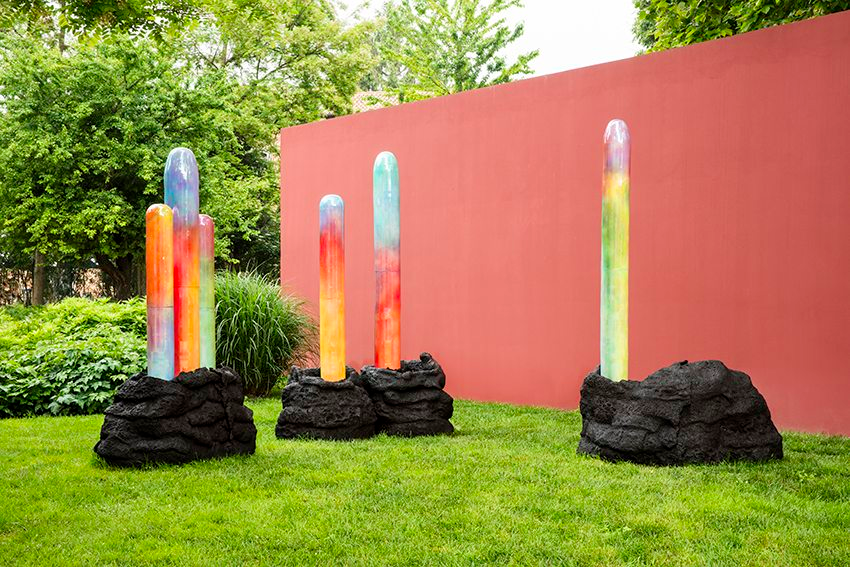 Venice Biennale, It Was Only a Matter of Time Before We Found The Pyramid and Forced It Open, (2017) glazed ceramic, Image: Andrea Rossetti.

The same vague yet lingering unease can be traced in the title of his installation at the Venice Biennale this year, entitled It Was Only a Matter of Time Before We Found The Pyramid and Forced It Open. Totemic, and almost primordial, the installation allegedly came as an aftereffect of a hypnotherapy video session the artist found online. The same video was used for his performance at the Whitechapel Gallery in 2015 entitled MIND AND BODY BODY AND MIND. Listeners would become better artists, so the video claimed. The mystical formation of the sculptures in Venice hark towards a religious ground, a sacred place. Arancio calls it a ’healing area’. Lava moulds of tree trunks in Lava Trees State Park on Hawaii Island inspired these sculptures.  However, in contrast to a place for healing, a petrified graveyard of trees is a jarring image. Paired with the ominous title, the installation seems more set to summon spirits than to soothe them. Arancio claims that the title refers to his obsession with the monolith in Stanley Kubrick’s 2001: A Space Odyssey. Would be worshippers at the Biennale are faced with totems that seem displaced in time, with their own presence and gaze. 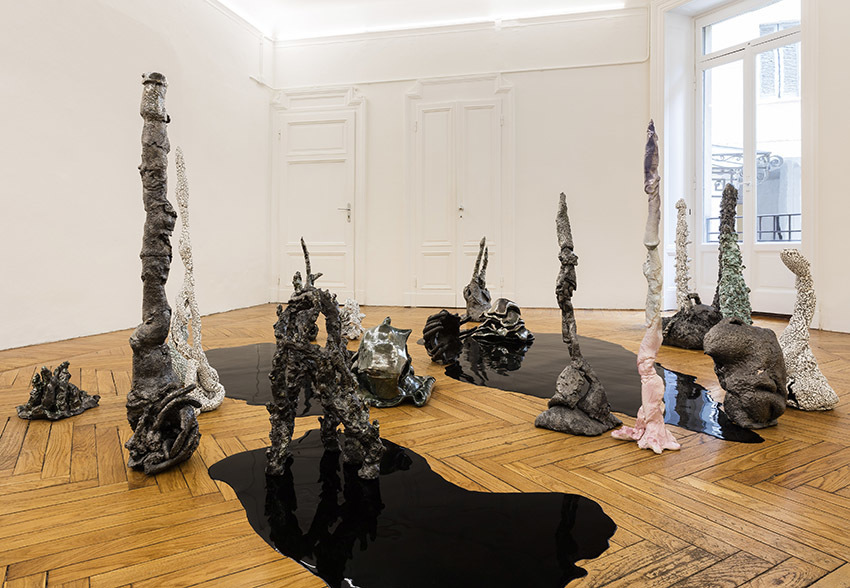 And These Crystals Are Just Like Globes of Light, (2017), installation view, Courtesy of Federica Schiavo Gallery

In his third solo show, And These Crystals Are Just Like Globes of Light, Arancio descends from the volcanoes and moves deep into ‘The Cave of Giant Crystals’, the caverns located beneath the Niaca Mines in Mexico. Containing the largest crystal structures known to man, Arancio had aimed to visit the caves to source inspiration for his sculptures… except the caves have been shut to the public since 2009 due to the vandalism and theft of fragments of the great structures. Despite efforts, the artist was unable to see the caverns in the flesh. Marrying myth with fact once more Arancio opted instead to create work based on his own imaginings and research of the cave. Blurring the line between science and fantasy, Arancio’s sculptures echo the now tenuous situation the caves are now confronted with.

The builders who discovered the crystals did so by accidentally draining a subterranean chamber full of water untouched by man. Where the presence of water allowed the crystals to grow undisturbed and at a gargantuan scale, its absence now threatens the shine, quality and even stability of the structures. Arancio’s gleaming black ceramics hint towards a pollution or degeneration; a rotting with time. Their phallic shapes are reminiscent of objects found in a plurality of ancient religions and spiritual practices, like talismans, idols or markers on a gravesite which vest the installation with a sense of foreboding. Like in his etching, Arancio captures something beyond our time; he is erecting a memorial for a natural wonder that is nearing total devastation. Soon all that may remain of this cavern could be man’s own memories and fictional accounts, and when that happens, Arancio’s will be one of them.

Salvatore Arancio graduated with an MA in Fine Arts Photography from the Royal College of Art (UK). He grew up in Sicily and has been living and working in London for many years. His works have been shown in museums such as Kunsthalle Winterthur (CH), the Contemporary Art Society (UK) and Whitechapel Gallery (UK). Most recently Arancio exhibited at the Venice Biennale and the Korean International Ceramics fair 2017.

Read more about his latest solo show, And These Crystals are Just Like Globes of Light (2017)  at the Federica Schiavo Gallery.

Read more about his installation at the Venice Biennale in an interview with FAD Magazine.